A Night to Remember

Poster For A Night To Remember

English
A Night to Remember is a 1958 Golden Globe Award-winning docudrama film adaptation of Walter Lord's book of the same name, recounting the final night of the RMS Titanic. It was adapted by Eric Ambler, directed by Roy Ward Baker, and filmed in the United Kingdom. The production team, supervised by producer William MacQuitty, used blueprints from the ship to recreate sets, and Titanic's fourth officer, Joseph Boxhall and ex-Cunard Commodore Harry Grattidge both worked as technical advisors on the film.

A Night to Remember won a 1959 Golden Globe Award for "Best Foreign Film."

The Titanic was the largest vessel afloat, and was believed to be unsinkable. Her passengers included the cream of American and British society. The story of her sinking is told from the point of view of her passengers and crew, principally second officer, Charles Lightoller (Kenneth More).

Once in the open sea on her maiden voyage, the Titanic receives a number of ice warnings from nearby steamers. Captain Smith (Laurence Naismith) is unconcerned and the ship continues on at high speed.

Late on April 14th, 1912, a lookout spots an iceberg directly in front of the ship. The ship turns hard to port, but the Titanic collides with the iceberg on its starboard side, opening the first five compartments to the sea, below the waterline. Thomas Andrews (Michael Goodliffe), the ship's builder, inspects the damage and finds that the ship will soon sink.

A distress signal is immediately sent out, and efforts begin to signal a ship that is on the horizon, a mere 10 miles away. But the ship's radio operator is off duty and he does not hear the distress signal. Fortunately, the radio operator on the RMS Carpathia receives the distress call, understands the emergency and immediately alerts Captain Rostron (Anthony Bushell) who promptly orders the ship to head to the Titanic at maximum speed.

The bow of the ship is taking in a lot of water and there are only two collapsible lifeboats left. Lightoller and other able seamen struggle to untie them and, unable to take the time to put passengers into the boats, leave them in the hope that the boats will save more lives.

The Carpathia is four hours away and is racing to the site, in hope of saving more lives. The ship sinks amid much chaos on the decks, with third-class passengers allowed up from below after the boats are gone.

Lightoller and many others swim off the ship. The ship sinks deeper into the water suddenly a funnel breaks loose and crashes into the water and the ship goes under. One of the overturned collapsible is floating, so Lightoller and a few more men balance on the boat and wait. Joughin is found in the water, not minding the cold, and pulled up on the boat. Lightoller spots another lifeboat and the men are saved. The Carpathia comes and rescues the survivors.

As the film ends, Lightoller, the senior surviving officer, reflects that they were all so sure about the safety of the ship and that he will "never be sure again, about anything."

Kenneth More recalled the production of the film in his autobiography, published 20 years later in 1978. He had served in the Royal Navy in World War II as a gunnery officer aboard the cruiser HMS Aurora and took on the naval officer's crisp and confident air of command when a crisis arose in the film-making. There was no tank big enough at Pinewood Studios to film the survivors struggling to climb into lifeboats, so it was done in the open-air swimming bath at Ruislip Lido at 2 o'clock on an icy November morning. When the extras refused to jump in, More realised he would have to set an example. He called out: "Come on!"

I leaped. Never have I experienced such cold in all my life. It was like jumping into a deep freeze. The shock forced the breath out of my body. My heart seemed to stop beating. I felt crushed, unable to think. I had rigor mortis, without the mortis. And then I surfaced, spat out the dirty water and, gasping for breath, found my voice.
'Stop!' I shouted. 'Don't listen to me! It's bloody awful! Stay where you are!'
But it was too late ....

The character of the baker, seen drinking after giving up his seat in a lifeboat to a female passenger, is based on Chief Baker Charles Joughin, who on that night drank some whisky, threw deck chairs overboard, rode the stern all the way down, swam in the freezing water for hours and was eventually picked up by the overturned collapsible boat B, surviving the disaster.

During the sinking, a steward pauses as he flees through the first-class lounge to ask ship's designer Thomas Andrews, "Aren't you even going to try for it, Mr Andrews?" This sequence was historically correct, and was replicated essentially word-for-word in the 1997 Titanic film, substituting that film's protagonists Jack Dawson and Rose DeWitt Bukater instead of the steward. The scene was also repeated in S.O.S. Titanic with a stewardess asking him if he will save himself, pointing out that there would be questions that only he could answer.

A Night to Remember won the Golden Globe for the "Best Picture - Foreign" category in 1959. It was also nominated for the Laurel Award for "Best Cinematography - Black and White."

Although at the start of the film the ship is christened with a bottle of champagne, the real Titanic was never christened – standard White Star Line practice was not to have a christening nor was there a great ceremony when the ship touched water in Belfast, although White Star did host a lunch. The footage of the launch is actually the launching of the RMS Queen Elizabeth. Otherwise, the inclusion of Edwardian archive film of liners gives a docudrama feel at times, despite the use of models for long-shots of the Titanic itself. And the depiction of the iceberg punching a big hole and causing mass panic is inaccurate.

As with most pictures about the Titanic, filmed before the discovery of the wreck in 1985, A Night to Remember portrays the Titanic sinking in one piece. The discovery revealed that the ship had broken in two and most films since then (e.g. the 1996 Miniseries Titanic, the Oscar-winning 1997 Film Titanic and the 2012 Miniseries Titanic), have reflected this point, although authorities debate whether the break-up happened while the ship was under the water and out of the view of survivors.

Despite these goofs, A Night to Remember is still regarded as the most historically accurate Titanic-movie ever made, and the best Titanic-movie filmed before the discovery of the wreck in 1985.

Although the sets were based on the Titanic, some were inaccurate, while others were based off of Titanic's sisters, Olympic and Britannic.

Lifeboat 4 being lowered away.

Mr. Yates gives out his letter to a woman boarding Emergency Lifeboat 2.

Collapsible C ready to lower away.

Lowe preparing to return for survivors. 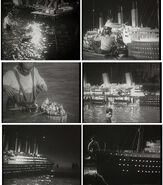