The forward funnels falling, The Blackout

RMS Titanic breaking in half was an event during its sinking. It occurred just before the final plunge, when the ship suddenly snapped in two pieces, the sinking stern settling down into the water and allowing the bow section to sink beneath the waves.

Many survivors, such as Charles Lightoller,didn't see the break-up, as most of the lights suddenly went out, plunging the ship into near-total darkness. However, others like Jack Thayer saw the huge silhouette of the ship falling back into the water or saw the ship "buckle".

It was unknown to the common people before the wreck was discovered in 1985. Many questions were asked about the break-up. "Did the break-up occur in front of the third funnel or behind it?" "Did the bow raise itself up?" Scientists have confirmed that it did happen, and it was caused by the uneven distribution of weight in the Titanic's stern. In the movie, the split happened behind the third funnel. This is unconfirmed in real life

The breakup took place at 2:17. It started with the ship's lights going out, plunging everything into total darkness. Rumbling and metallic screeching then shook the ship. The ship then broke into two (possibly 3-4) pieces just aft of the 3rd funnel deckhouse. Around here, it's debated about how the break-up occurred.

The ship reached an angle of 23 degrees with the compass platform just out of the water, the keel broke up to F deck but the weight of the stern was not enough to crush the coal bunkers in the bow section. The aft end of the bow began to flood and sink, pulling the stern into a "top-cant" position. The deck-house of the third funnel was crushed and the funnel fell. once again the stern section was under a lot of stress and the keel broke again, this time under the aft expansion joint and up to B deck. This time the stern section had enough force to thrust the coal bunkers (which had now become part of the lower forward tower) and the broken keel sections through the uptake of the third funnel. The stern slowly settled back and briefly pulled up the aft end of the bow section until the aft expansion joint began to split. The bow section sank and pulled the stern down now only connected by B deck, until the deck could no longer take the stress and broke away from both sections. The stern section may have bobbed back a little but also started to pivot in a semicircle as it sank and went almost vertical before sinking.

The ship was at an angle of 14-18 degrees when her lights went out at 2:18. The ship suddenly snapped in two pieces, sending the sinking stern falling slowly into the water. Water surged into the bow and stern of the ship through the huge cracks, causing the bow to sink below the waves. The double bottom still attached to both parts, pulled the stern to an angle of 6 degrees. Once at 6 degrees and the double bottom detached, it went heeled over to port 90 degrees then went vertical 90 degrees and plunged.

The ship was at an angle of 45 degrees when her lights went out at 2:17. The ship suddenly snapped in two pieces, sending the sinking stern crashing down into the water, creating a huge wave killing people on the decks and crushing people in the water. Water surged into the bow and stern of the ship through the huge cracks, causing the bow section to sink beneath the waves. The double bottom, still attached to the almost afloat stern, pulled the stern to an 90 degree angle, where it sat momentarily for a minute. Once the double bottom separated and the bow went down, the stern rose up and dove straight down beneath the waves.

The ship was at an angle of 11 degrees at 2:17. The ship then slowly began to crack in front of the third funnel and

break apart slowly. The stern fell back slowly five degrees back into the water, and water poured through the crack. With this new flooding area, it increased weight in between the two sections, bending the two broken parts together. When the double bottom failed, it allowed water to pour in pulling the ship into a tiny of about V-shape, though the bow still stayed all the way underwater. The two parts tangled together sank underwater together, until they separated underwater. Another V-Break theory, which has proven to be false, states that the bow had risen out of the water after the break. This is physically impossible because the bow is full of water, and it does not lift out of the seas with all that extra weight. This theory was created by Aaron1912, a former Titanic enthusiast. Has been banned on YouTube for spreading inaccurate information.

The ship was at an angle of 30 degrees when her lights went out at 2:18. The ship suddenly cracked to the double bottom but stayed in the upright position. The whole ship then sank underwater at 50 degrees in a straightforward direction, and the two parts then separated underwater.

With any of the six previous theories, many survivors claimed to see a small explosion or a small fire occurring in the hull of the ship when she split in two. If this is true, the explosion was most likely caused by boilers exploding due to the breakup. If it was a small fire, it may have been caused by broken electrical wires snapped during the breakup, which showered sparks on flammable interiors. Sparks were reported to have flown from the broken electrical wires.

The ship was at an angle of 20-23 degrees when her lights went out at 2:17. The ship suddenly snapped in two pieces, just around the third funnel, causing the stern to slowly settle into the water. The keel fails first and the draft and lower hull is crushed and breaks apart. The only thing holding the ship together now is B deck. Water surged into the bow and stern of the ship through the huge cracks, causing the bow section to sink beneath the waves. B-deck breaks and the superstructure beneath the 3rd funnel crumbles. The stern rises to the high angle of 70-90 degrees, where it then sinks and disappears beneath the waves. You can find more information at this video made by Titanic Animations.

2021's On A Sea of Glass Sinking was the closest thing to what the survivors saw during the sinking (self-proclaimed statement), With Tom Lynskey and The Historians working together, they revised and create a new theory which also included a new Break-Up Theory of the Titanic

On A Sea of Glass, is a Book Written By Bill Wormstedt, J. Kent Layton and Tad Fitch ([1] Link To Book) it portrays and shows numerous survivor accounts and tells the story of how the Titanic went under.

The final plunge 2:16AM, the Titanic keeps rising and stress builds up on both keel and the structures above near the 3rd funnel base and the aft grand staircase. Bending and rumbling Noises are heard, at around 2:17AM The ship begins to rise higher, as high as 23 Degrees. as it reaches that tension and compression stresses work on the ship bending it further, the expansion joint is still trying to hold the titanic, thus the cracks on the top run around the ship splitting it into sections, the keel pushes the engines up a bit making the ship split into 4 major sections (The Aft Tower, the Forward Tower and The Stern and Bow sections). As The cracks finally meet The stern slowly settles back into The water, the ship initially breaks just in front of the 3rd Funnel.

(Referring to The Picture or GIF On The Right) Titanic, The Stern Sections with 2 Other Main Sections (Aft and Forward Tower) Settle back slowly on the water creating small splashes and waves. The Emergency Lights kick in, a massive cloud of sparks come rushing out near the break-up Area (a fan-shaped eruption of sparks) as the stern settles back, massive groaning and straining noises do not stop. as Heard and Reported by survivors as well..

The ship emits a dark red flame-like glow as the emergency lights kick in, the remaining funnels fall at this point. As the stern settles back, additional strain around the aft expansion joint cause it to fail and the Forward Tower to break off and crash into the ocean, some may have mistaken it for being the engines falling out of the Ship (as reported by Seaman Frank Osman [2]). The tower section falls to the ocean crushing survivors down below, The Aft tower remains only just attached to the stern section.

The stern settles back for about a minute before 2:18AM at which it begins to rise again to a 85-90 Degree angle before vanishing at 2:20AM

VIDEOS OF THE SINKING:

[4]Titanic 109 - ON A SEA OF GLASS LIVE! Anniversary Livestream and Animation 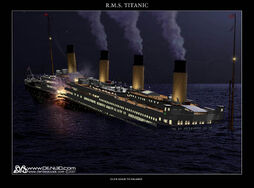 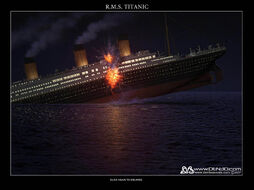 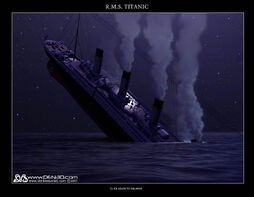 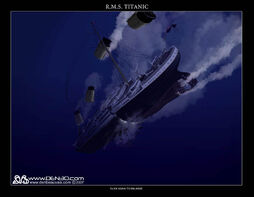 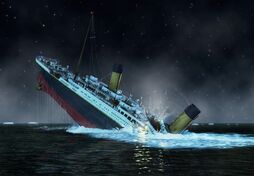 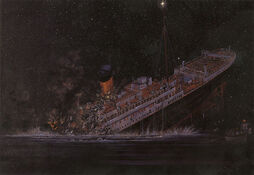 The first representation of the break-up 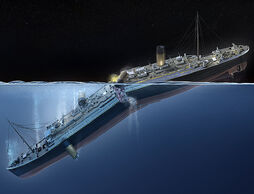 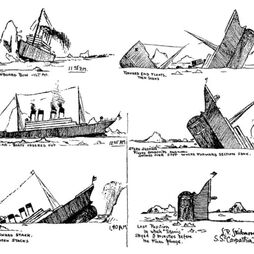 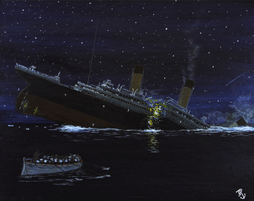 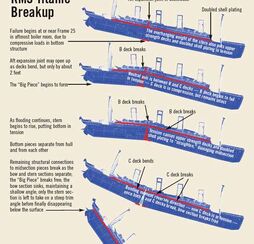 Break-up of the Titanic' in the 1996 Miniseries Titanic

Break-up of the Titanic in Titanic: The Legend Goes On (2000) 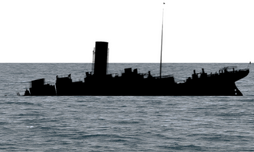 What the Titanic may have looked like when the stern settled 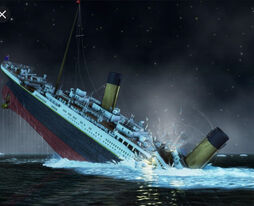 Exploding and breaking of the Titanic 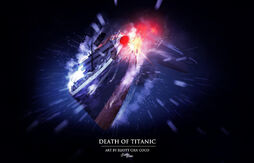 Titanic breaking in two in the 2012 miniseries

Fall of The Forward Tower (ON A SEA OF GLASS)

Stern Settling Back (ON A SEA OF GLASS) 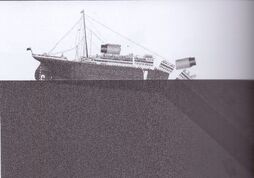 On A Sea Of Glass break-up diagram (from book)

Community content is available under CC-BY-SA unless otherwise noted.