After boat C had been lowered from the starboard side, the crew tried to fasten boat A to the davits when it was washed off Titanic at 2:14 am. The boat was washed over the side of the ship and in the chaos, the canvas sides had not been put up, so it was soon awash with icy seawater, half-submerged and dangerously overloaded. around 17 to 20 people started climbing into it from the water, but only 13 of them survived the night. The boat was partially filled with the icy water.

Several people including first class passenger Thomson Beattie and Edith Corse Evans, the third class passengers Arthur O'Keefe, Edvard Lindell and Gerda Lindell and a couple of firemen died of hypothermia or fell back into the sea. 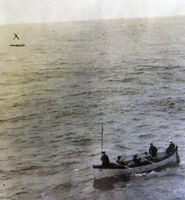 Collapsible A is prepared by several crew members as water washes on deck in A Night To Remember.

A screenshot from The Making Of A Night To Remember, showing a behind the scenes shot of Collapsable A's launch. Murdoch, Lightoller, and Moody have each been identified in this shot.

Murdoch, Wilde, Moody and his men start to push down Collapsible A to the boat deck in Titanic 1997

Murdoch, Wilde, Moody and his men successfully pushed down Collapsible A to the boat deck in Titanic 1997

Shooting at Collapsible A in Titanic (1997)

Collapsible A throwing the occupants to the sea in Titanic 1997

The water starts to filled the Collapsible A

Add a photo to this gallery

Retrieved from "https://titanic.fandom.com/wiki/Collapsible_A?oldid=46444"
Community content is available under CC-BY-SA unless otherwise noted.