Construction of the Titanic

Construction of the Titanic

Sea trials
The Titanic was constructed at Harland and Wolff, Belfast, Ireland. It took exactly 3 years to go from a keel to a completed ship.

Titanic's keel was laid on the unoccupied spot on the Arrol Gantry, the other spot was then still occupied by the Olympic. It took 6 weeks just to lay the keel. For two years and two months, that keel was being built up to a hull, complete with bulkheads, boilers, and engines.

The Olympic's keel under construction, Titanic's would have looked alike

Part of the casco is built

The massive screws and rudder dwarf a person

The ship was launched on May 31st, 1911, over 7 months after Olympic's launch. It was a non-paid holiday for the workers, forcing them to spend some of their weekly £2 wages. It was even a double holiday for Harland and Wolff and the White Star Line, because the Olympic would be delivered the same day. She was completed, had finished sea trials and was now anchored under steam in Belfast Lough, waiting for the White Star Line's special guests and bring them back to England.

Lots of people came to look at the launch, mainly because the clear spring skies, which was already quite rare in Belfast. As soon as 11:00 A.M. came, Corporation Street was clogged with cars and pedestrians all heading to the Albert Quay. The authorities closed part of the quay and charged a few shillings for entrance. Many people diverted to Spencer Basin, which also gave a good (and free) view on the Titanic, ignoring the piles of wood and coal, making it nasty and dusty. Among those people were the thousands of employees who weren't invited, to watch their work slide into the water.

The ladies and gentlemen who were invited were able to wait for the launch with more luxury and elegance. Especially for them, a massive tribune had been placed with room for a few hundred. Most of those people were Harland and Wolff's designers, drawers and engineers. The leading crewmen were only allowed in if they showed their exclusive invitation.

The press was given a second tribune. They were early at the scene, even though the launch was going to be exactly like Olympic's launch 7 months ago, without even a bottle of champagne, as this wasn't a trait shared by the White Star Line to any of their ships.

After 62 seconds, the hull was already in the water.

Pulled to the fitting out basin

There was still a long way to go before the freshly launched hull became the RMS Titanic like her designers had wanted her. She still had to be painted, furnished, boilers installed, engines installed, masts erected and funnels loaded, to name just a few jobs. Part of this was done in the Thompson Dry Dock.

Windows on B Deck promenade are removed for conversion to cabins

A funnel is lifted to the ship

Titanic with one funnel Olympic is in the background 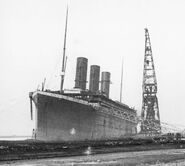 The first three funnels are installed

All funnels are installed 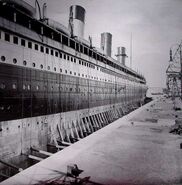 A funnel is painted

A view of Titanic from the Thompson Drydock.

The Olympic needs to be repaired, delaying the Titanic's completion

In the drydock And the hull is being painted black

The hull is being painted black

Titanic is completed and ready for sea trials
Community content is available under CC-BY-SA unless otherwise noted.