Titanic Wiki
Register
Don't have an account?
Sign In
Advertisement
in: Locations on board, First Class Accommodations

First Class reception of the Olympic

The First Class Reception was a room located on D Deck, at the foot of the Grand Staircase. The First-Class Dining Saloon on D-Deck was preceded by a large Reception Room, measuring 460 m2 (4,951 sq ft), located at the foot of the forward Grand Staircase and encompassing the entire width of the ship. An ornate candelabra rested on the middle railing at the base of the staircase, the light oak color of which contrasted warmly with the white-painted Reception Room. The Reception area would have been the first impression of the Titanic for many First-Class passengers entering through the two semi-enclosed entry vestibules on either side of the staircase. Around the corner from the Reception Room, forward of the staircase, was the set of three First-Class elevators which ran the length of the stairwell.

The Titanic and Olympic both featured duplicate entrance vestibules on their port and starboard sides within the D-Deck Reception Rooms. There were sets of double gangway doors within the hull, screened by wrought-iron grilles. The vestibules were partially enclosed areas in the same white Jacobean-style paneling and each contained a large sideboard for storing china. One set of French doors led into the Reception Room, but there was also a broad arched entryway leading to the elevators. Separate corridors led off of the vestibules to the First-Class staterooms in the forward part of D-Deck.

The Titanic's vestibules differed from those on the Olympic – they were reduced in size to make the Reception Room larger and they eliminated the communicating corridor between the two sides in order to enlarge the elevator foyers. The Olympic vestibules contained Third-Class staircases that led down to E-Deck, which were eliminated on Titanic, and the elaborate wrought-iron grilles which covered the gangway doors were unique to Titanic.

It was reported that during the sinking 2nd Officer Lightoller ordered crew members to open the port side gangway doors on D-Deck for loading more passengers into the lifeboats nearer to sea level. The 1986 expedition confirmed that one of the port-side doors was wide open and the inner doors pulled back. This would have significantly increased the Titanic's flooding if the crew neglected to close doors.

Early in the sinking, the officers operated under the belief that lifeboats would be safer to lower with fewer passengers in them. Once they were all safely in the water, they could then row to the gangway doors to take more passengers through them. This would ease up complications lowering heavy lifeboats crowded with passengers and later allow them to be filled to full capacity. 2nd Officer Charles Lightoller, in preparing to take such action, ordered six seamen down below to open a gangway door located in this room. This proved to be a costly mistake, however, as the six seamen Lightoller sent below never returned, leaving him shorthanded in launching his lifeboats. It is unknown what became of the six seamen as they were never seen again, though we do know that they managed to open up the gangway door. The door remained opened as it eventually submerged, allowing water unobstructed access into the Reception Room- not only accelerating the sinking, but also tipping the balance of the ship heavily to port. Though Lifeboat 4 was told to row to the open gangway door on D-Deck, they found that it was completely underwater by the time they got to where it should be. None of the lifeboats ever retrieved passengers through this open doorway.

The distance the ship traveled was calculated every day and then presented to the passengers via the ship's "daily runs". Frequently, passengers would place money into a pool betting on how far the ship had traveled in the previous day, turning it into a hot topic of discussion for everyone on board. Some passengers would seek out those "in the know" such as officers, engineers, or stewards to try and obtain "Insider information" on the subject to aid them in placing more accurate bets. First Class Passenger Elizabeth Lines was in this room when she noticed Captain Smith and Bruce Ismay at a nearby table discussing the daily runs on April 13th. She reported that Ismay was clearly excited at how the new ship was faring, and was highly enthusiastic. He claimed that the ship would "do better tomorrow and that he felt they could increase speed further still. He stated that "We will beat the Olympic and get in to New York on Tuesday." Captain smith smiled and nodded as Ismay spoke, though Mrs. Lines could not recall him ever saying a word while Ismay spoke. While this has been portrayed negatively quite often, as if Ismay was demanding the ship travel faster to beat the Olympic's record at reaching New York - it was in fact a common held belief among almost all the passengers that the ship would only continue to sail faster through the remainder of the voyage. Mrs. Lines noted that Captain Smith seemed to show no reservation on Ismay's assertions that the ship would arrive in New York on Tuesday, and there was no hint of an order in his voice-Ismay instead seemed to only be thrilled his new ship was performing so well. 

In Titanic (1943) the reception room was four double doors in the Grand Staircase/Ballroom/Dining Room hybrid. It is a prominent room seen flooding a lot.

A Night To Remember[]

In ANTR, the Reception Room was a major location. It was still dry at 2AM. At 2:13 the the forward dining room exploded and water burst through, which meant it was underwater.

Again it is a major location, appearing many many times. Boarding, Church, talking, the Dinner, and finally Caledon Hockley chases Rose and Jack into the room. It floods fairly quickly, 6 steps from the top to 2 steps in about 2 minutes. It completely flooded at around 1:56 in the film. 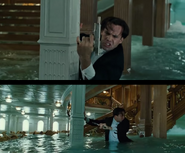 A view of the entrance.

The First Class Reception in A Night to Remember (1958 film)