The Forecastle deck was the forward most deck on a ship.

On Titanic it was located at B Deck level. The deck was accesed by two staircases at the after end of the deck, coming from the Forward Well Deck. This deck had the base of the foreward mast, and cargo hatch no.1. This deck included capstans, bollards, winches, the central anchor, anchor chains, the breakwater and the anchor crane. The forward end of the deck was blocked by a curved railing and the forestay for the forward mast.

The forecastle deck was 106 feet long. This is the most photographed part of the wreck.

The forecastle deck remained relatively the same throughout Olympic's career. However, it was originally built without a skylight for the crew's galley but a skylight was added there later.

The forecastle deck is pretty much intact except the cargo hatch No. 1 was popped off the ship when it hit the ocean floor. The hatch cover can be found a few feet in front of the ship. The mast was bent backwards and damaged the bridge superstructure. The mast has sagged and deteriorated in recent years. 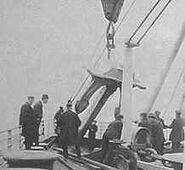 Lifting the anchor in place

The Forecastle Deck in S.O.S. Titanic (1979), showing the superstructure, though none of these locations bore any resemblance to the Titanic, as it was filmed on the Queen Mary

The Forcastle deck in Raise the Titanic (1980)

The Forcastle deck in Titanic (1997 film)

The Forcastle deck in The Legend of the Titanic (1999)

The Forcastle deck in Titanic: The Legend Goes On (2000)

Retrieved from "https://titanic.fandom.com/wiki/Forecastle_Deck?oldid=46345"
Community content is available under CC-BY-SA unless otherwise noted.