Titanic Wiki
Register
Don't have an account?
Sign In
Advertisement
in: Locations on board, First Class Accommodations, Locations featured in most films

The Grand Staircase was one of the most impressive features on board the RMS Titanic and the centre of First-Class activity. It was an opulent, lavish staircase that spanned six decks (from the Boat Deck to E Deck), continuing through to F Deck as an ordinary stairway. It was located between the 1st and 2nd funnel.

The main stairwell wasp🐝 located in the bee hive part of the ship and began on the Boat Deck, extending six flights down to E Deck. B and D Decks contained entry foyers on either side where First Class passengers would embark and disembark, the D Deck entryway leading directly into the Reception Room. Each level was constructed in solid English oak with sweeping curvy girl and the surrounding spaces paneled in the sleek neoclassical William and Mary style. The balustrades displayed distinctive wrought iron grilles with ormolu swags in the style of Louis XIV. The A Deck level was undoubtedly the most spectacular and is the most recognizable due to its frequent depiction in film.

The staircase was crowned by an extravagant wrought iron and glass dome with a large chandelier at the centre. The wrought-iron dome was installed on the roof of the boat deck and provided natural light to the stairwell before being artificially lit at night from behind. On the central landing of the A-Deck staircase was an exquisitely carved clock with allegorical figures on either side, known as Honor and Glory Crowning Time. At the foot of the staircase, on the newel post of the middle balustrade, was a bronze cherub holding an electric torch. B and C Decks probably had smaller replicas of these cherubs at either corner of the staircases, and contained landscape oil paintings as the focal points of their landings instead of the unique clock on A-Deck.

After the ship sank, it was discovered that Titanic's Grand Staircase had never been photographed, so people started to re-use some images of Olympic's Grand Staircase instead. Slowly, several well-known images are claimed to be from Titanic, while they are all from Olympic.

Directly forward of the staircase, there were three lifts going from A Deck to E Deck, operated by three lift attendants: Frederick Allen, William Carney & Alfred John Moffett King. The lift attendants knew the ship very well, and could provide directions to passengers if needed. They all died in the sinking.

The A Deck landing had a magnificent clock, flanked by the oak-carved allegorical figures of Honor and Glory Crowning Time.

There is also a life-sized replica of the [forward] Grand Staircase in the Titanic Museum, Belfast and the upcoming video game Titanic: Honor and Glory also will prominently feature the Grand Staircase.

From the Grand Staircase a passenger could access almost all of the facilities available in First Class, level by level:

Titanic's construction was delayed twice due to incidents with the Olympic. The first incident occurred on September 20th, 1911, when the Olympic collided with the HMS Hawke. The second incident occurred in February when the Olympic lost a propeller blade on an eastbound crossing. Because of these delays, Titanic's maiden voyage was pushed back from March 20th to April 10th. In spite of this delay, Titanic was still largely incomplete as her maiden voyage drew near. Work was conducted on the vessel until the very last minute. The impact of this was noticeable in some areas of the ship. Many public spaces in both 2nd and 3rd class were not fully furnished, and many unoccupied staterooms weren't even prepared for passenger use. Perhaps most notable of all, the famous clock at the boat deck landing of the Grand Staircase - named Honor and Glory Crowning Time - may never have been installed on the ship at all. Though impossible to prove, there are a few pieces of evidence that point towards this possibility. None of the passengers ever made note of seeing a clock on the Grand Staircase during the voyage in their recollections, and it was reported by workers that a mirror had temporarily been put in place of the clock less than a week prior to sailing day. While workers could recall without a shadow of a doubt the mirror being in place in the Grand Staircase, none could ever recall whether or not the clock itself was finally installed prior to the ship's departure. As such, it is possible that the mirror remained in place when Titanic set sail, and that the famed clock was never on board at all.

The time was 12:45 AM, and Titanic seemed to be in a relatively stable position. Her forward list had come to a near halt, stopping at an angle of roughly 3°. For all on board, it was evident that the ship was taking on water, though she still seemed to be stable and secure. Few felt she would sink, even among the ship's crew. Steward John Wheat seemed to have a different impression, however. Earlier, he had assisted in closing some of the watertight doors along E-Deck and F-Deck. While he did not see any water during this task, it may have left something of an impression on him, for around this time Steward Wheat decided to break away from his duties long enough to proceed to his quarters on F-Deck and retrieve some of his personal belongings. 

When Steward Wheat entered E-Deck by means of the Grand Staircase, he found it devoid of life. The 3rd Class passengers with cabins in the bow had been driven out by the rising water, making an exodus to the stern of the ship as they sought refuge. The crew and passengers that had quarters along E-Deck had all been roused and sent up top. Surrounded by an eerie silence. Steward Wheat continued down the stairs to his quarters, located down a short hallway that extended off of the F-Deck Grand Staircase landing After retrieving his belongings, Steward Wheat took a moment to ensure that all the others housed here-primarily Turkish Bath attendants had all been roused from their quarters. Finding no one remaining, he returned to the stairwell - only to find water tricking down. Rushing back up to the E-Deck landing, Steward Wheat found that water had made its way through the corridor along the starboard side of the vessel. It was flowing around the corner and down the stairs into F-Deck. Steward Wheat was witnessing firsthand the beginning of Titanic's end. Water was now spilling over the tops of the watertight bulkheads. The time was now 1:00 AM. Titanic only had another hour and 20 minutes left.

The Grand Staircase remained the same layout except it was planned to have a decorative blue color scheme, and on the aft wall on A Deck and Boat Deck, a pipe organ was to be installed. It would have the ability to either be played manually with keys, or using a roll to play it automatically. The instrument still exists today in playable condition in the Museum für Musikautomaten in Seewen, Switzerland. The addition of the large instrument also made for the removal of the flooring on Boat Deck on the aft side of the stairwell, so passengers could only get from one side of the staircase on Boat Deck by walking down to the central landing and back up the other side. The floor on A Deck would have also been made of a dark greenish-blue tiles in a different pattern, instead of the black and white floor pattern on Titanic. In addition, the electric lifts on Britannic went up to the Boat Deck instead of terminating at A Deck like they did on Olympic and Titanic. There were also larger rails over the light shafts on either side of the staircase and some believe Honor & Glory Crowning Time was replaced by a landscape painting.

E Deck, the deck where the staircase ended began to flood at about 1:15 A.M (although water was present at 12:45 A.M, the water was filling F-deck for the time being). Water would probably make it to D Deck at probably 1:30-1:45 A.M. C Deck would begin to flood at approximately 1:50-2:00 A.M. Sinking of the ship begins to get faster. B Deck starts to flood at 2:05-2:10 A.M. Water reaches A Deck just before 2:15 A.M. It isn't known if people were standing in the staircase when water was at the A Deck landing. A Deck windows begin to shatter which increases the rate of flooding. On the outside of the staircase on the boat deck, water begins to rise over the walls. Water by now is a 1/4 covering the Boat Deck stairwell. Pressure from the water shatters the Boat Deck windows and more water comes in.

The windows begin to form a little whirlpool, sucking in passengers nearby. There is a claim that the only girl in first class who died was sucked into the staircase with her mother but it is not for sure. Water completely submerges the exterior of the grand staircase, trapping passengers in there. The dome implodes at approximately 2:15 A.M due to pressure from the water above it and killed everyone trapped inside. The rushing water breaks the Boat Deck to C Deck stairwells. The rest of the stairs from D Deck and E Deck remain on and break off when the bow hits the ocean floor. 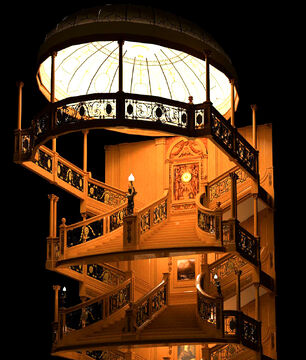 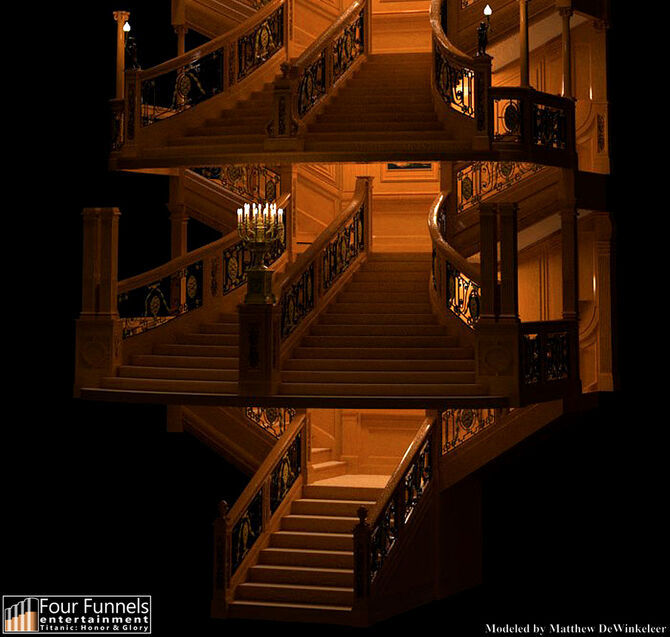 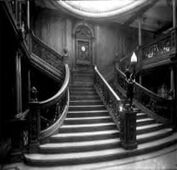 Grand Staircase in Kraft Televisión Theatre -A Night To Remember- (1956)

The Grand Staircase in A Night to Remember (1958 film)

Grand Staircase in The Time Tunnel -Rendevous with Yesterday- (1966)

Grand Staircase in Raise The Titanic (1980)

Grand Staircase in Voyagers! -Voyayers of the Titanic- (1983)

Grand Staircase in Pinky and the Brain -Das Mouse- (1995)

The dome implodes, completely flooding the Grand Staircase in 1997 movie

Grand Staircase in The Legend of the Titanic (1999)

Grand Staircase Flooding in The Legend of the Titanic (1999)

Grand Staircase in Titanic The Legend Goes On (2000)

Grand Staircase in In Search of the Titanic (2004) Note: Notice in this sequel, the Grand Staircase looks more accurate than it looked in real life, rather than what it looked like in its predecessor movie: The Legend Of Titanic. 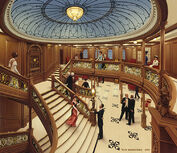