HMHS/RMS Britannic was the third and final of the Olympic-Class Ocean Liners and the sister ship of the RMS Titanic and RMS Olympic.

Some claim her original name was going to be RMS Gigantic and it was changed after the sinking of the Titanic (as 'Giant' in her name would scare away the traumatised public) whilst still in construction to RMS Britannic but White Star Line denied this.

In that role she was shaken by an explosion in the Kea Channel off the Greek island of Kea on the morning of November 21st, 1916; and sank with the loss of 30 lives. However, most of the lives lost are thought not to have been as a result of drowning but more of a result of the propellers smashing up the lifeboats sucked towards them. The Britannic most likely hit an underwater mine, but a torpedo attack is highly unlikely, as neither side in the war was allowed to attack any hospital ship of any nationality.

From Gigantic to Britannic[]

There are several first-hand pieces of evidence that the Britannic was originally meant to be named Gigantic.

7/6/1911 — The Liverpool Journal of Commerce reports on the rumour of a new White Star Line ship but the company said that there was no truth in the report. The Shipping Gazette and Lloyd's List two days later revealed information from Harold Sanderson that there would be a third Olympic-class ship.

24/7/1911 — The New York Times states that the third ship, to enter service in 1913 will be called the Gigantic. This story reportedly came from the men on the SS Baltic.

19/8/1911 — The Southampton Times and Hampshire Express refers to the story above given out by the Baltic's crew, but dismisses it.

25/11/1911 — Various newspapers, including The New York Times reports fanciful details (such as a golf course) of the new steamship Gigantic. These fantasies would persist well after the Titanic had sunk.

2/2/1912 — The journal Engineering mentions that Andre Citroen and Co. had received a contract to build the gearing mechanism for the steering engines for five ships, one of which is the Gigantic, the largest liner in the world.

8/2/1912 (approx) — Winston Churchill's representative reports that the new ship under construction is to be called Gigantic.

20/2/1912 — Anchor and chain manufacturer Hingley's order book mentions the name Gigantic; this is later crossed out and replaced with Britannic.

c. 10/4/12 — The Shipbuilder remarks that the third ship had not yet been named.

22/4/1912 — The New York Times reports on modifications to the 1000 feet long Gigantic in the wake of the Titanic disaster. This news is also used in The Shipping Gazette and Lloyd's List the next day.

27/4/12 — The Illustrated Western Weekly News reports that the Darlington Forge Company is making a stern frame and rudder post for a ship almost identical to the Titanic, the Gigantic.

9/5/1912 — The Journal of Commerce reports on the Gigantic, saying that is what she is known as in Belfast. It also says that she will be very little, if at all longer than the Olympic and the Titanic but will be at least one foot more broad (which was accurate).

11/5/1912 — The Southampton Times and Hampshire Express publish an article dismissing the name Gigantic.

16/5/1912 — The New York Sun quotes Ismay as saying that the White Star Line never intended that the third ship be called Gigantic. Two days later, The Southampton Times and Hampshire Express repeats this news, with the postscript that "it was all a gigantic joke."

6/8/1912 — The New York Sun reports that "the decision of the White Star Company to put an inner shell in the Gigantic, the new sister ship of the Olympic, will involve an additional expense of $350,000 in the construction of the vessel."

24/8/1912 — The Scientific American reports that the name of the third ship is Gigantic.

15/9/1912 — Reported in the Nottingham Evening Post the next day, shortly after 10am, stern frame of Britannic removed from Darlington Forge to West Hartlepool for shipment to Belfast. The Manchester Guardian notes that the stern frame took four months to make, was divided into two parts, together weighing 70 tons. Four large brakctes, each weighing about 20 tons are to be despatched later

14/12/1912 — The Weekly Irish Times refers to the Gigantic which was being built in Belfast, and that she would be the largest vessel in the world.

12/11/1913 — Hingley's refer to Gigantic in paperwork relating to the transporting of the anchor to Belfast.

On the morning of November 21st, 1916; the ship hit a German naval mine with a devastating explosion, it's force almost broke the ship in two. She sank in only 55 minutes because the nurses left the portholes open to keep the wounded healthy and the explosion was bigger, so water got in more quickly. Some of the crew panicked and decided to launch the lifeboats without orders, but that endsied tragically as the captain was sailing towards the island of Kea which was just 3km away because the lifeboats where sucked into the ship's propellers, later then ripped apart, creating the loss of almost 30 lives.

The ship slipped below the surface at 9:07 AM. There were 1,066 people on board, and all of them but 30 were taken from the water and lifeboats. In spite of Britannic being the biggest ship lost during the First World War, her sinking was not as tragic in terms of loss of human life as were the sinking of the Titanic and Cunard's sinking of the Lusitania, or many other ships lost during the First World War.

Britannic was thrown instantly off-course by three points (33.75 degrees), while her bow rose noticeably and then falls back down. Severe shaking and vibrations along the hull. The engines are stopped and the lifeboats are made ready to be lowered. After less than 2 minutes Boiler Room 6 is already flooded and inoperable. Advancing flooding into Boiler Room 5. The water was about 180 meters deep.

Captain Bartlett was soon informed that the forward holds are rapidly flooding. The forward E-Deck portholes went underwater and the ship started taking a starboard list. Soon after the Captain restarted the engines in a desperate attempt to beach the ship.

The lifeboats were still being filled but not allowed to leave. Still, some of the boats leave the ship (from the portside) without authorization. Because of the list, they found themselves scraping along the ship's side. The propellers were breaking the surface by now.

Due to the increasingly bad situation, Bartlett decided to stop the ship and order all boats to be sent away. He's must have known that just minutes before his order, the two lifeboats have been drawn into the portside propeller (killing their occupants), while a third one has a narrow escape as the propeller stops seconds before impact. While lying idle, the Britannic was settling more slowly and most of the lifeboats managed to escape without further problems. Bartlett decided to try again to beach the ship and restarts the engines. Britannic's sinking rate increases again due to the open portholes and water is soon reported forward on D-Deck. When Bartlett was informed of the water on D-Deck he gave the order to abandon ship and Britannic's whistle was blown for the last time. Water then covered the bridge and Assistant Commander Dyke informed his Captain that all have left the ship. Dyke, Chief Engineer Fleming and Bartlett simply walked into the sea near the forward gantry davits and swim towards nearby boats. Shortly after their escape the third funnel collapses and as the water is now 119 meters deep, Britannic's bow hits the bottom whilst her stern is still above the surface. The last few men who were below decks by now, had left the ship. Fifth Officer Fielding estimates the stern rising some 150 feet into the air. With all her funnels detached, Britannic finally completes her starboard roll, causing heavy damage to the forward bow area. Britannic slips beneath the surface almost an hour after the explosion.

The wreck of the Britannic was discovered by Jacques Cousteau in 1975. The ship's lying on her starboard side, 121 meters below sea level. Since then, many diving expeditions have been made to the wreck, making countless of images and videos. One expedition in 2003 showed that the watertight doors of the ship were open. Remains of mines were found near the wreck, further proving that the Britannic was sunk by a mine.

The wreckage of the HMHS Britannic

linoleum tiles inside the Britannic wreckage 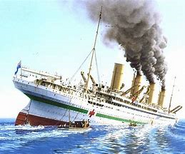 Lifeboat heading into the propeller's

Although the sinking of the Britannic isn't depicted as many times as her doomed sister ship, there is one movie about it; the film was a fictional account featuring a German agent sabotaging the liner. She is also seen in the book Lost Liners, which tells the stories of Titanic, Britannic, Lusitania and other famous sunken ships. Ghost Liners is a another book that covers the sinking.

Two Titanic survivors were on the Britannic when it sank and survived: their names were Violet Jessop and Arthur Priest.