Maiden voyage of the Titanic

The Maiden voyage of the Titanic was scheduled to consist of four trips: from Southampton to Cherbourg, then continue to Queenstown, across the Atlantic Ocean to New York, then finally back to Belfast. A timeline of this voyage is available here.

1647 passengers embarked at Southampton. Only 24 of them paid for a trip to France; disembarking in Cherbourg. Titanic arrived one hour late into Cherbourg because of a near-collision in Southampton with the SS New York. One passenger, scheduled to embark in Cherbourg, still missed the boat despite the hour delay. Frank Carlson's car broke down and Titanic left without him, however his name remained on the passenger list and was erroneously added to the list of missing people after the disaster.

These 24 people disembarked in Cherbourg:

The near-collision in Southampton

In the River Test

In the river Solent 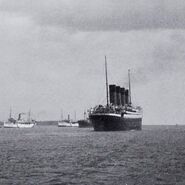 Off to Cherbourg
Add a photo to this gallery

On the second part of the maiden voyage, some steering trials were undertaken. It seemed Titanic could turn very quickly once a maneuver was initiated. However, because Titanic was 883 feet long, it took the necessary time to start turning due to her length (which was about to be put to a life-altering critical test). At Queenstown, most of the 123 embarking passengers were steerage (3rd class). 7 passengers, all First Class passengers who boarded at Southampton, left the ship. Fireman John Coffey also left the ship: he basically only wanted a free trip to Ireland and deserted his crew duties. These 8 people had no idea they escaped from one of mankind's greatest disasters.

Ready to drop anchor at Queenstown

Dropped anchor, tenders approaching
Add a photo to this gallery

The 1911-1912 winter had been one of the warmest in ages and there was much more drifting ice than normally at that time of year, even on the more southern shipping lane route that Titanic followed across the North Atlantic. Captain Smith must have known the area was dangerous even for the largest moving object ever made by the hand of man in all of human history that was thought to be "practically unsinkable." However, Smith had no choice but to go to New York, over 2200 passengers & crew were counting on him to bring them there. And there was also Titanic's grandeur and her potential to make a record time crossing and boost White Star Line's reputation for not just luxury but also efficiency against rival Cunard. 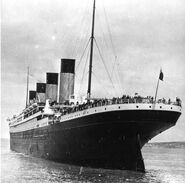 Departing to doom
Add a photo to this gallery
Retrieved from "https://titanic.fandom.com/wiki/Maiden_voyage?oldid=39288"
Community content is available under CC-BY-SA unless otherwise noted.