RMS Carpathia was a Cunard Line transatlantic passenger steamship built by Swan Hunter & Wigham Richardson. Carpathia began her maiden voyage in 1903 and became famous for rescuing the survivors of RMS Titanic after she struck an iceberg and sank on 15 April 1912. The Carpathia herself was sunk in the Atlantic on 17 July 1918 during the First World War by a German U-boat U-55.

Carpathia made her maiden voyage on 5 May 1903 from Liverpool, England to Boston, USA, and ran services following 2 main transatlantic routes. A British route (Liverpool–Queenstown–Boston, with Boston switching to New York in summers), and a Mediterranean route (Trieste–Fiume–New York). She was used as a troop ship by the Canadian Expeditionary force during WW1 (see official war diaries of CEF - 27 Batt. 15 May 1915)

The Carpathia was a modified Ivernia-class ship, approximately 12 m (40 ft) shorter than her "half-sisters." Their designs were based on a long hull, a low, well-balanced superstructure, and four masts fitted with cranes, allowing for effective handling of large amounts of cargo. The Carpathia was designed with a single tall smokestack funnel to carry soot and smoke far away from passenger areas.

On the night of Sunday, 14 April, her wireless operator Harold Cottam had missed previous messages from RMS Titanic, as he had been on the bridge at the time. He received messages from Cape Race stating that they had private traffic for Titanic. He thought he would be helpful and sent a message to the Titanic stating that Cape Race had traffic for them. In reply, he received a distress signal. Cottam awakened Captain Arthur Henry Rostron who immediately set a course at maximum speed (14.5 knots) to Titanic's last known position, approximately 58 miles (93 km) away. Rostron ordered the ship's heating and hot water to be cut off in order to make as much steam as possible available for the engines.

At 4 o'clock on the morning of the 15 April, Carpathia arrived at the scene after working her way through dangerous ice fields. Carpathia was able to save 712 people.[1]

For the rescue work, the crew of the Carpathia were awarded medals by the survivors. Crew members were awarded bronze medals, officers silver and Captain Rostron a silver cup and gold medal, presented by Margaret Brown. Rostron was later a guest of President Taft at the White House and was presented with a Congressional Gold Medal, the highest honour the United States Congress could confer upon him.

Carpathia was part of a convoy when she was torpedoed on 17 July 1918 off the southeast coast of Ireland and west of the Isles of Scilly by the Imperial German Navy U-boat U-55. The Carpathia listed to port and sank bow first.[2] 157 passengers and the surviving crew were rescued by HMS Snowdrop the following day. The last sighting was at 02:45am, just as the stern section sank.

On 9 September 1999 Reuters and AP wire services reported that Argosy International Ltd, headed by Graham Jessop, son of internationally known undersea explorer Keith Jessop, had found the wreck of the Carpathia on the bottom of the Atlantic Ocean earlier that week, about 185 miles off the southwestern English coast. "She is in reasonably good condition for a wreck of that age," Jessop said. "She is in one piece, and she is upright."[3]

The next year, American author and diver Clive Cussler announced that his organization, NUMA, had found the wreck in the spring of 2000,[4][5] at a depth of 500 ft.[6] After the submarine attack Carpathia rolled over and landed upright on the sea floor. The wreck currently lies off the coast of Ireland.[7]

The current owner of the vessel is Premier Exhibitions Inc (RMS Titanic auction) who plans to recover objects from the wreck.[6] The same company owns the salvor-in-possession rights of the RMS Titanic whose artefacts are shown in worldwide exhibitions. 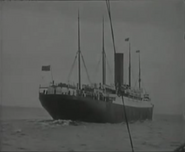 RMS Carpathia, as seen in The Obsession (Real Footage of the Carpathia)

RMS Carpathia, as seen in A Night to Remember (1958 film)

RMS Carpathia, as seen in Danielle Steel's No Greater Love (This footage comes from S.O.S. Titanic)

RMS Carpathia, as seen in the 1996 Miniseries Titanic

RMS Carpathia, as seen in The Legend of the Titanic (1999)