S.O.S. Titanic is a 1979 television movie that depicts the doomed 1912 voyage from the perspective of three distant groups of passengers in First, Second, and Third class. The script was written by James Costigan and directed by William Hale (credited as Billy Hale). It is the first Titanic film released in color.

Perhaps the most moving plot line is the tentative shipboard romance of two cautious, reflective schoolteachers, Lawrence Beesley (David Warner, who would go on to appear in the 1997 Film Titanic) and the fictional Leigh Goodwin (Susan Saint James). Both are saved.

In steerage, the plot focuses on the experiences of six or so Irish immigrants, who are first depicted approaching the ship from a tender in the harbor of Queenstown (now Cobh), Ireland. These characters, all based on real people, include Katie Gilnagh (played by Shevaun Bryers), Kate Mullins, Mary Agatha Glynn, Bridget Bradley, Jim Farrell, Daniel Buckley, Martin Gallagher, and David Charters. During the voyage, Martin Gallagher falls for an unnamed "Irish Beauty" and the men befriend a Swedish passenger named Olaus Abelseth (Nick Brimble).

One of the film's major themes is class distinctions. Second Class passengers Beesley and Goodwin discuss their ambiguous position "in the middle" and debate whether class distinctions are uniquely British. Goodwin briefly encourages Beesley to pursue his apparent attraction to a young Irish beauty in Third Class, but he rejects this advice. The Third Class passengers, mostly from poor backgrounds, show no resentment at their meager accommodation—Katie Gilnagh comments that sleeping four-to-a-room is far more comfortable than the situation she knew in her overcrowded childhood home—but on the night of the sinking, they struggle to evade the efforts of ship's personnel to keep them below decks and away from the lifeboats. Led by Jim Farrell, they successfully sneak up to the First Class restaurant, where Farrell persuades the Sergeant-at-Arms to allow the women—but only the women—to pass up to the boat deck.

Another major theme is the gay, hectic atmosphere aboard ship. Young Mary Marvin comments that many of the First Class passengers are honeymooners, and that she does not want to land, but simply to go on sailing and dancing forever. In much simpler surroundings, the Third Class passengers also engage in music, dancing, winning, and whirlwind romances. Meanwhile, Beesley and Goodwin toy with the possibility of embarking on an illicit affair in an empty cabin but decide not to. Goodwin comments that shipboard romances, like shipboard friendships, are meant to end with the voyage.

A third theme is who deserved, or accepted, responsibility for the wreck of the RMS Titanic. Captain Smith, a veteran White Star captain nearing retirement, is depicted as a masterful leader who nevertheless failed to slow down in spite of being well aware that he was traveling into ice-laden waters. Shipbuilder Thomas Andrews radiates an almost saintly quality, seeing to the final details of construction and repairs himself, tenderly looking after passengers and crew, and even conversing with a young stewardess about their common hometown of Belfast. He fully understands the implications of the collision, and his knowledge that he cannot save the ship clearly breaks his heart. Meanwhile, White Star Line owner J. Bruce Ismay wavers between a stance of command and an unwillingness to take responsibility for the sinking. Identifying himself as a passenger, he defiantly boards a lifeboat, only to experience a nervous breakdown aboard the RMS Carpathia. Ismay is the only one of these three men who survives, and it is clear that he will never fully recover from the sinking.

Several of the scenes on the exterior decks, as well as those in the ship's wheelhouse, were filmed on board the inert RMS Queen Mary in Long Beach, California. Some interior scenes were filmed at the Waldorf and Adelphi hotels in London and Liverpool, respectively. The town of Peel on the Isle of Man served as the Queenstown backdrop. Some external shots were filmed aboard, and of, the TSS Manxman which also appears as the RMS Carpathia in some of the opening sequences.

Olaus Abelseth was still alive when the film was released, he would die the following year. It would be the last time any credited actor played a Titanic survivor that was still alive at the time.

S.O.S. Titanic poster
Add a photo to this gallery

Passengers dine in the First Class Dining Saloon (shot at the Waldorf's restaurant).

Add a photo to this gallery

Behind the scenes[edit | edit source] 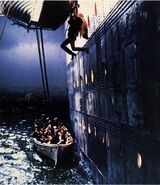 Set photo of Lawrence Beesley's escape.
Add a photo to this gallery

Retrieved from "https://titanic.fandom.com/wiki/S.O.S._Titanic?oldid=47091"
Community content is available under CC-BY-SA unless otherwise noted.