Titanic Wiki
Register
Don't have an account?
Sign In
Advertisement
in: Passengers, Third class passengers, Survivors of the sinking

escaped the sinking in

Theodore De Mulder was a Third Class passenger of the Titanic. He survived the sinking in Lifeboat 11.

Theodore De Mulder was born in Nederhasselt, Belgium to Franciscus and Theresa De Mulder (De Langhe). He boarded the RMS Titanic in Southampton on April 10th, 1912 as a third-class passenger.

"Our grandfather traveled from Aspelare with a coach and horse to the station in Haaltert, where he took the train to Antwerp. There he took a boat to London and from there a train to Southampton, which was already a big journey because most of them never left their small village. And then the trip itself on that master ship - 'unsinkable' - must have been a great experience 'til the day they sank and then the story of his life started again. A totally new life."
- Erwin De Mulder (grandson)

Theodore was one of four Belgian men who would survive the sinking. According to him, he reached the Boat Deck with John Sheerlenck and Julius Sap. All three would later give numerous and conflicting accounts of how they survived so it remains unclear just how they left the Titanic. All later claimed to have jumped into the sea and were rescued by passing lifeboats. Theodore himself told how he was rescued after clinging to a chair he had thrown into the sea. More than likely, much of the evidence seems to indicate that all three men left together in either Lifeboat 11, 13, or 15, since a large percentage of Third Class men escaped in these boats. Sap had mentioned years later that several women had hid him under their skirts, however that claim remains unconfirmed.

After his rescue, De Mulder joined his friends Sap and Sheerlenck in a travelling road show. When they lost all their promised money, the American Red Cross assisted them. De Mulder received $300.00 with the notation that he had "a wife and two young children, as well as a dependent aged father and mother-in-law in Belgium." He had lost all his baggage and money which was valued at $200.00.

Afterwards, he moved back to Belgium and opened a roadside café which he named "In Den Titanic," or "In the Titanic." Theodore died on April 19th, 1954; only four days after the forty-second anniversary of the Titanic's sinking. His wife erected a white cross in 1912 to thank God for saving her husband.

"Once, he gave us the whole story, talking to his good friend Urbain Gerry who were neighbors when they were living as farmers in Canada." - Erwin

Theodore was so impressed by what he had seen he never really spoke of it. Subsequently, his grandson Erwin did so in his place. There are many stories about what had happened to him on the Titanic. Especially at his family home, he never spoke on the disaster.

Elsewhere, Theodore was a bit more revealing about what he had witnessed. According to Erwin, he had only once explained the whole story in detail. Theodore realized that there were no more lifeboats, so he jumped into the icy sea without a life jacket, since he had forgotten it in his cabin. He then began to swim to a lifeboat which he later tried to board several times, but all his efforts were in vain . However, he then clattered some ice cold water from his sleeve into the boat, so people bailed back. He took his chance and he crawled quickly in the now vacant place.

Erwin realizes that he will never know the true story in it's fullness. "We're not sure exactly how it went, he may have changed his story to make money once in America." But at that time such a thing was not easy to admit. By indestructible creed 'women and children first' made common folk upset that men had managed to save their own skin. But it was not that part of the story which Urbain was surprised at. He later told Erwin: "He claimed to me that the Titanic - just before the sinking - was almost perpendicular to the water." Urbain would reply " ; but that's impossible!" However, Theodore would still insist it was perpendicular to the ocean. In retrospect, of course, it turned out he was right. Only in 1985, in light of discovering the wreck of the Titanic, did it become clear that the ship was broken in two and the stern had come all the way up.

Theodore's grandson explained what happened to his grandfather after he survived the sinking of the Titanic. "Eventually, my grandfather continued to live in America for 20 years, where my father was born. In his 30s, he returned to Aspelare in Belgium. He then opened a cafe which just about everybody loved. He fittingly called it 'In Den Titanic'. That pub existed into the late 40s and was well known in the area. Even older people still talk to me about it."

Although Theodore was always studiously silent about the Titanic, he named his pub after it. "That's true," says Erwin, "but I do not know the Titanic was really a trauma for him. He never had a depression, he could just live on. But it surely meant something special to him. If you hear an carry a painful memory around so many people, hardly anyone can help...it is something you carry your whole life. To what extent, I do not know. I just know my grandfather himself. "One hundred years after the sinking, his Titanic story lives on, it still remains in Aspelare." Erwin continued ", sometimes a stranger will talk to me and ask, 'You are the grandson of a Titanic survivor?" "But I do not like to brag about it because why should I find merit in that?" When asked if he would want to reopen the pub he said ", I would do that for my three children, so that they can continue the family story."

Erwin's son Denver Ocula, also spoke of the disaster. His story is told in the following Dutch youth news show. [2]

Besides his experience of the Titanic, Theodore also lived a very determined life. He once swam four miles to file suit after being barred from Canadian citizenship. He managed to do this because he was once a champion swimmer of the Belgian Army. He was a man who gave it his all. He was traveling to America to earn more money for his wife, children, and his dependent father and mother-in-law, Philemon and Victorine Van D'Hondtette (Nieuwenhowve)

Titanic Impressions and 100 years of Titanic[]

This impressions and texts are contributed by Hein van den Brempt, of Ninove, Belgium.

The well-known tour of the "Three Titanic Survivors"[]

After their rescue and arrival at Detroit, Jules Sap, Jean Sheerlenck, and Theodore De Mulder formed a temporary trio - 'The Titanic Survivors - with a theater.

The retouched photo was initially meant to be a postcard, which was sold during the performances of the three Flemish survivors to the public. The theater had ten thousand of f them printed, to sell at 25 cents each. For two weeks, they did their story, exaggerated of course since they had to put money where their mouths were for the public.

None of the three Flemish people spoke English, so the theater freely translated into English.  Especially the stories of the rescue were exaggerated and fabricated.

“The blood rushed to my head, I got furious right after and jumped into the sea” - De Mulder

“And later I was standing in the lifeboat; some men wanted to throw me out, but the women have covered me with their garments and 8 hours I was on the bottom of the boat hidden by my companions," - Sap

"When the boat was about to sink into the abyss, I grabbed a First Class couch; threw it into the water and jumped on. I held it under my body as best I could, and after a half an hour of wandering, I reached a small boat which I was allowed to board. But only just after I had taken place three people swam towards it, which all three crawled in, but all along the edge itself. And look! Neither was all in, the boat turned over, and again we were the prey of the ocean," - De Mulder

That success came to an abrupt end when the theater along with - quote Jules Sap - . “The Miss who sold the postcards" abandoned the three rescued ones. At start they were promised five dollars a day.

After his performances ended, Theodore temporarily stayed in Canada. In 1920 he settled with his wife Jeanette D'Hondtette and children in Michigan and in 1932 became an American citizen. Theodore and his family returned to Aspelare in 1934. He opened a café named "In the OV BL Titanic" and there told his Titanic stories. Popularly Titanic café was a bus stop. In gratitude of God rescuing her husband, Jeannette D'Hondtette planted a man-sized crucifix saying: “Lord save us, we perish."

The church where Theodore was christened and baptized

Belgians who were compelled to swim to save their lives, and arrived in America on the S.S. Carpathia. 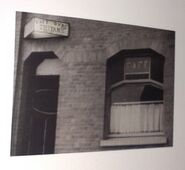 A picture of the old café. OVBL means OVerBLijvende, which translates into "the one who survived". Titanic courtesy of Hein Van Den Brempt ([1])

Theodore poses with his daughter Marie, most likely they were in Canada 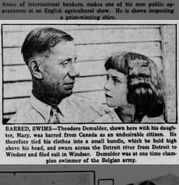