Titanic is a four-part television miniseries period drama written by Julian Fellowes based on the sinking of the RMS Titanic.

It was released in at least 86 countries in March and April 2012 for the disaster's one hundredth anniversary, April 15th, 2012; one of three such productions, the other being Titanic: Blood and Steel and Saving the Titanic.

The series is a four-part television costume drama created by producer Nigel Stafford-Clark and written by Julian Fellowes to mark the one hundredth anniversary of the maritime disaster on April 15th, 1912. It sets out to paint a portrait of a whole society, telling the stories of a wide range of characters, both real and imagined, from every social level. Their narratives are developed and gradually interwoven over the first three episodes, each of which ends in a cliffhanger as the ship begins to founder. The fourth and final episode draws all of the different stories together and reveals to the audience who survives.

Paolo and Mario board the Titanic.

Fire reported in a coal bunker.

The Californian as seen as a light from the bridge of the Titanic during the iceberg collision.

The Maloney's in their cabin.

Ismay speaking to Lightoller about the Italians.

Lightoller asking Captain Smith where the binoculars are.

Lightoller realizing the engines have stopped.

Henry Wilde informing Captain Smith that the Carpathia is coming.

Seaman Hawkins wanting to go back.

Boat Deck behind the scenes photo. 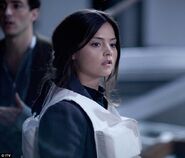