The replica ship of the RMS Titanic in landlocked Sichuan province, China will be a full-scale reconstruction of the original Olympic-class ocean liner. It has been commissioned by Seven Star Energy Investment and is being constructed by Wuchang Shipbuilding. Despite this, the vessel is being built around the location at which it will be docked, and not at Wuchang Shipyard. The original Titanic sank in 1912 and is considered one of the most well-known ocean liners of all time. The rebuild project was first reported by media in October 2013 and formally launched in January 2014. The ship will be the same size as the original Titanic, hence 269 meters in length and 28 meters wide.

The remake will not sail on any ocean but will be permanently docked in a reservoir in Sichuan's rural Daying county. The replica vessel, which will be the centerpiece of the Romandisea resort and will house hotel rooms, is currently under construction by the river Qi (郪江), a right tributary of the Fu River. The new Titanic is being assembled at the coordinates 30.6282°N 105.2220°ECoordinates: 30.6282°N 105.2220°E.

In 1912, the original Titanic set out on its maiden and only voyage from Southampton in the United Kingdom to New York City. Five days into the voyage, the ship hit an iceberg and sank, killing 1496 of the 2208 aboard. Titanic was the largest ship of its time.

South African businessman mogul Sarel Gous proposed building Titanic II in 1998. Gous said he had acquired the original drawings for the famous ship and now wanted to fulfill his dream. If the ship had been completed, it would have had a length of 290 meters (950 ft) and a width of 33 meters (108 ft), which is 21 meters (69 ft) long and 5 meters (16 ft) meters wider than the original.

In 2006 the Replica Titanic project was scrapped due to high costs and a low amount of support for the project. The last Titanic survivor to pass away, Millvina Dean, had expressed her opposition to the project.

Another replica ship based on the Titanic was announced and planned by Australian billionaire Clive Palmer. It too was referred to as the Titanic II. The ship's maiden voyage has been delayed from 2016 to 2018 and work on this replica is yet to begin. Deltamarin, the project's Finnish engineering partner, confirmed to Australia's ABC News in March 2015 that work at Deltamarin on the project had been halted. Furthermore, the project's trademark has been abandoned.

James Cameron's 1997 Titanic movie enjoys great and lasting popularity in China and introduced the Chinese masses to the Titanic story. The importance of this movie as a reference point for the Chinese developers is indicated by the fact that actor Bernard Hill, who portrayed Captain Smith in Cameron's film, was present at the launch of the project and was named the "honorary captain" of the vessel to be constructed. The investors behind the Sichuan replica approach the 1912 tragedy primarily as a story of heroic self-sacrifice in the face of disaster. The CEO of the investment group is reported to have elaborated on the 'Titanic spirit':

Su Shaojun insisted that harrowing stories that happened when the Titanic sank represented a concentrated release of the noblest side of human emotions hidden deep in people’s hearts for more than a hundred years. “People have never forgotten how at that time people sacrificed their lives to carry out their responsibilities, with men protecting the women and children and couples side by side in life and death. That is the Titanic spirit of responsibility and universal love.” He thinks the Titanic spirit shall be passed on and a really unsinkable Titanic shall be rebuilt, “and let it become the place to pass on and experience the great spirit of Titanic. Romandisea will, therefore, become a world-class tourist destination with a noble soul and spiritual pursuit.”

On December 23, 2017, the Facebook page of the project indicated that boiler room 1 will be replicated; the engine room will also be recreated, complete with a (mock-up) reciprocating steam engine for visitors to see.

Using audiovisual technology, the ship was at one point intended to contain a simulation of the original's collision with an iceberg that led to the original ocean liner sinking. This caused some criticism. Hollywood production designer Curtis Schnell, who is hired in to work on the project, stated that the 1912 tragedy is approached in a “very respectful way”. However, that idea has since been scrapped. As for the authenticity of design, Schnell stated: “We're trying to get as close as we can. We are not building every room in the [original] ship, by any means, but the shell of the ship and the exteriors will be quite accurate, [and] there will be interior rooms to be able to tour and see from the standpoint of historical accuracy.”

Xinhua News Agency has reported that it took two years to design the new vessel with cooperation from an American firm and that the blueprints of the original ships were obtained for the purpose of a basis for the new ship.

Construction is being done based on the design of the original Titanic and is being assisted by designers and technicians from the United States and Britain.

As said by the vice general manager of the Wuchang Shipbuilding Industry Group Corp., construction of the replica is being done with investment from Seven Star Energy Investment, a private company based in Sichuan province. Prior to the commencement of building this ship, none of the numerous proposed full-size replica ships of the Titanic ever made it to the point where actual construction began. Despite this, in May 2015, Wuchang started making parts for the vessel. A keel laying ceremony at the site of the future resort occurred at the end of November 2016, with Lord Peter Mandelson attending.

The Twitter account of the remake, @RomandiseaT2, posted images of the ship's construction in February 2017, which show its hull slowly progressing in construction. It also posted a three-second bird's the eye view time-lapse of construction on March 1. An April 10 tweet presented fresh images, apparently showing the beginnings of the stern. The images of the April tweet showed considerable and highly notable progress in the hull's construction. A string of further images, also showing the bow section of the upcoming ship, was published in the Daily Mail on April 13.

In May 2017, an aerial photo showed the construction of the hull well underway, at the assembly site. The Daily Mail also published further images on May 10, showing the sides of the hull beginning to take shape. By September 2017 six of the nine decks had been constructed.

Su Shaojun, CEO of the investment group, initially indicated that the replica was expected to be completed around the end of 2017. However, the on-site assembly did not begin until the end of November 2016 (not May 2015 as originally stated). One year later construction of the hull was well advanced with completion pushed back until 2019. In January 2018 NPR reported that the project might be experiencing financial problems. Later that month Romandisea stated that construction had reached F deck but would be suspended for Spring Festival celebrations. As of November 2018, the developers have made no announcement on whether or not construction has resumed. Aerial images captured between April and October of 2018 showed no visible changes in the ship's construction status. 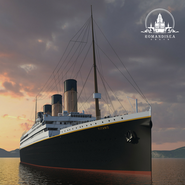 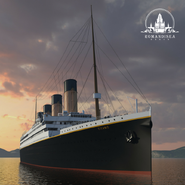 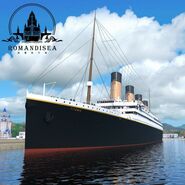 Add a photo to this gallery
Retrieved from "https://titanic.fandom.com/wiki/Titanic_Replica_(Sichuan,_China)?oldid=37402"
Community content is available under CC-BY-SA unless otherwise noted.