If you're on the Titanic Wiki, you're clearly more than aware that Titanic is being re-released in 3-D on April 4th, 2012. In fact, you've probably already bought your tickets (if not, click here). What you may not know is that Harper Design as just come out with a brand new paperback edition of the best-selling book James Cameron's Titanic. The re-issue features a slick new cover (at right) and a new foreword by Cameron himself, who has been in the news recently for becoming the first man to descend into the Mariana Trench, the deepest and most unexplored part of the ocean and the world. Hmmm, I wonder where he caught the deep-sea exploration bug?

Anyway, the new book's most redeeming feature is the inclusion of 26 never-before-seen images from the film studio's archive, some of which you can see below! If this doesn't get you pumped for Titanic in 3-D, watch this video and get out the tissues. But check out these photos first! 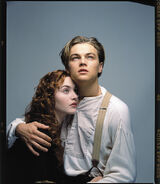 A couple facts, taken from the book, related to the photos above:

You can purchase the book here.

Retrieved from "https://titanic.fandom.com/wiki/User_blog:Porterfield/A_New_Book_with_Never-Before-Seen_Images_from_the_Production_of_Titanic?oldid=22987"
Community content is available under CC-BY-SA unless otherwise noted.